A miscarriage of justice 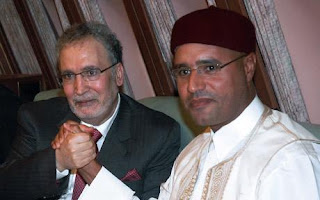 Professor Sikora says its embarrassing the bomber has lived past his three month prognosis.

Tell that to the victims.

Tell that to their families.

Professor Karol Sikora, who assessed Abdelbaset Ali Mohmet al-Megrahi for the Libyan authorities almost a year ago, told The Sunday Times it was "embarrassing" the bomber had outlived his three-month prognosis.

Megrahi, 58, is the only person convicted of the 1988 bombing of a US Pan Am jumbo jet over Lockerbie, which left 270 dead.

A report in the Sunday Times said Libyan authorities, keen to secure Megrahi’s release, asked several experts to put a three-month estimate on the bomber’s life but Professor Sikora was the only one to agree.
Professor Sikora, the dean of medicine at Buckingham University and medical director of CancerPartnersUK in London, was paid for his medical assessment of Megrahi at Greenock prison on July last year.
He told the newspaper: “There was always a chance he could live for 10 years, 20 years ... But it's very unusual.

"It was clear that three months was what they were aiming for. Three months was the critical point.
"On the balance of probabilities, I felt I could sort of justify [that]."

Saif Gaddafi, eldest son of leader Colonel Gaddafi, said in May that Megrahi was still "very sick" with cancer.

The Scottish government insists Kenny MacAskill, the justice minister who took the final decision to release Megrahi, based his ruling on a medical report by Dr Andrew Fraser, director of health and care at the Scottish Prison Service (SPS).

A spokesman said Professor Sikora’s advice to Libya “had no part to play in considerations on the Megrahi case”.

Jack Straw, then Justice Secretary at Westminster, admitted last year that trade and oil agreements were an essential part of the British government’s decision to include Megrahi in a previously planned prisoner transfer agreement with Libya.

He wrote to his Scottish counterpart to say it was "in the overwhelming interests of the United Kingdom" to make Megrahi eligible for return to Libya.

As part of the conditions of his release, Megrahi has to provide a monthly report on his medical condition to East Renfrewshire Council – the local authority where his wife lived during his time in prison.

However, lawyers have prevented the council from releasing reports used to update the Scottish government on his health.

Meanwhile, documents that could clear Megrahi’s name are to be published in his controversial autobiography, it was reported.

An investigation by the Scottish Criminal Cases Review Commission, which lasted three years, concluded that there were six grounds for believing Megrahi may have suffered a miscarriage of justice.

Those have never been made public but a report in the Sunday Mail said they would be part of the book, work on which is “well under way” at a UK publishing house.
Posted by Sam at 7:33 AM