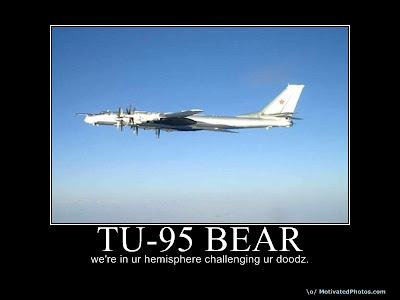 Do we need to reset the reset button?


Russia is continuing to fly strategic nuclear bombers near U.S. and Canadian airspace because the Russian military is seeking to maintain "the illusion of power," the commander of the U.S. Northern Command says.
Adm. James A. Winnefeld Jr., who took over U.S. Northern Command in May, said in an interview that beginning a couple of years ago, Russian strategic aviation forces began stepping up training flights of nuclear-capable Tu-95 Bear bombers near or through U.S. and Canadian airspace.

"In some cases, this is about the illusion of power, where power is not quite there," said Adm. Winnefeld, commander of the Colorado Springs-based Northcom. "They are trying to show the world that they are a powerful nation, and we're not giving them the satisfaction … ."

Adm. Winnefeld, who also heads the U.S.-Canadian North American Aerospace Defense Command (NORAD), said jet interceptors are not ordered to intercept all the Russian bomber flights. "If we intercept every single flight that comes out in our direction, then we're really just feeding into their propaganda," he said.

"So we intercept them when we feel like we ought to, and we have various criteria that we use for that, to include just rehearsing our own skills to be able to do that."

In general, however, "we just leave them alone," he said, noting that the Obama administration has "done a good job of trying to hit the reset button with these guys, and sooner or later they've got to respond."

The new START arms treaty is a good sign that the Russians may be coming around, Adm. Winnefeld said, noting that there are still "elements in Russia" that adhere to Cold War views.

Asked if the flights were continuing, he said: "Every now and then, they'll do a flight. It's maybe not as frequent as it was a couple of years ago, but they are still out there from time to time."

According to Northcom figures, so far this year there have been five jet intercepts of Russian bombers near U.S. or Canadian airspace. Last year, there were 17, and 12 in 2008 and 18 in 2007. By contrast, between 1999 and 2006 there were only 11 encounters in the air with the Russian bombers.