They were out looking for a fast food brains place 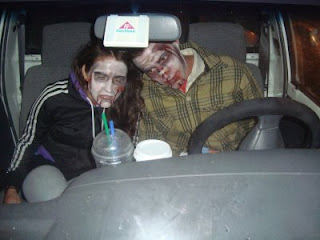 Now Oregon has joined the States that have undergone sightings of the undead and other such things including UFO's.

"Zombies" crash on I-84 near Lloyd exit

PORTLAND, Ore. -- A car full of people dressed as zombies crashed on Interstate 84 near downtown Portland on Friday, causing initial confusion by people who witnessed the crash.

Portland Police said the car was swerving in the eastbound lanes of the freeway just east of the Lloyd District just after 9:30 p.m. when it rolled over and crashed onto its top.

Police said that in their investigation they learned that the people inside the car were dressed as zombie costumes and they were headed to a party at the time of the crash.

Sgt. Greg Stewart said people who witnessed the crash initially thought the victims' injuries were much more serious, because of the zombie costumes.

"We're glad that everyone is alive, despite being 'undead'," Sgt. Stewart said, referring to the costumes.

While everyone in the car was taken to the hospital, Stewart said crews are investigating the possibility that more people were in the car at the time of the crash but fled the scene on foot.

The crash halted traffic in the eastbound lanes for about an hour, reducing travel to just one lane.  All eastbound lanes were opened at around 11 p.m.
Posted by Sam at 8:34 AM