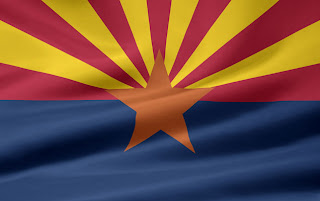 The DOJ filed its lawsuit against the State of Arizona yesterday afternoon.

The grounds for the suit?  That the Arizona law is preempted by the Federal Government under the Supremacy Clause of the US Constitution.

I don't believe it is, but we'll see.  Interestingly enough despite all the hoopla that the Arizona law is discriminatory (it isn't) the suit makes no mention of discrimination.

I have linked to the blog Legal Insurrection which has the complaint filed in the Federal District Court in Phoenix.

I am re-printing the blog from Hot Air below.  Its a great site to check out.


The Department of Justice will file a lawsuit this week, perhaps as early as today, against Arizona to block its new immigration-enforcement law.  They plan to use the weakest argument possible, that of pre-emption, which amounts to a surrender on the grounds that the Obama administration has claimed in the previous three months of debate:


The Justice Department has decided to file suit against Arizona on the grounds that the state’s new immigration law illegally intrudes on federal prerogatives, law enforcement sources said Monday.

The lawsuit, which three sources said could be filed as early as Tuesday, will invoke for its main argument the legal doctrine of “preemption,” which is based on the Constitution’s supremacy clause and says that federal law trumps state statutes. Justice Department officials believe that enforcing immigration laws is a federal responsibility, the sources said. …

The preemption doctrine has been established in Supreme Court decisions, and some legal experts have said such a federal argument likely would persuade a judge to declare the law unconstitutional.

But lawyers who helped draft the Arizona legislation have expressed doubt that a preemption argument would prevail.

Why might they be skeptical of this approach?  The argument relies on a position that claims that the federal government is the only sovereign with jurisdiction to enforce immigration laws.  They may need to explain, then, the DoJ effort to train state and local law enforcement on immigration law and enforcement.  The program, called Basic Immigration Enforcement Training (BIET), offers the following training:


A rising immigrant population in the U.S. has led to a dramatic increase in local, state, and tribal law enforcement encounters with both legal and illegal immigrants during routine police duties. As immigration continues to affect interior communities, there is an increasing demand for law enforcement officers to have a working knowledge of immigration law and policy.

BIET is a highly interactive, self-paced multimedia training program that addresses the immigration knowledge requirements of local, state, and tribal law enforcement officers. BIET addresses a wide range of topics including:
BIET was developed by Cameron University and Advanced Systems Technology, Inc. with funding received from the U.S. Department of Justice COPS Office. The pilot program was available for free to the first 500 officers from law enforcement departments.

It seems rather clear that the DoJ intended to get state and local law enforcement involved in immigration efforts.  Arizona’s law doesn’t set up the state as an adjudicator of the complaints, but merely requires police to check status and refer suspects to ICE when circumstances warrant.  It doesn’t violate federal prerogative at all, but instead forces the federal government to act responsibly to enforce the law.

Besides, this issue of pre-emption works the other direction.  Does this mean that state and local police have no jurisdiction to enforce federal drug laws if they don’t violate state or local law?  Terrorism?  Wire fraud?  If a court rules that referrals to federal agencies from state and local law enforcement are unconstitutional on the basis of pre-emption, it will make the Gorelick Wall look like a curb.

Furthermore, this is weak tea compared to the Obama administration’s rhetoric on the subject.  They have spent the last three months declaring this unconstitutional on the basis of discrimination.  If that were true, the government would have made that its primary argument.  The fact that they’re going with pre-emption means that they’re conceding that the discrimination argument never held water — and that their accusations of bigotry against Arizonans were nothing more than demagoguery.

Update: Legal Insurrection has the complaint, which was filed today.


The court filing states that Arizona law is pre-empted by federal law and therefore violates the supremacy clause of the U.S. Constitution.
The filing makes no assertion that the law is discriminatory or risks being applied in a discriminatory fashion, as the president and other officials said they feared would be the case. Interestingly, this suit makes no civil rights charges against the Arizona law.

If there is no civil-rights violation, then why is Obama suing over it?  I got this earlier by e-mail from Hot Air reader Mark W:


I’ve always thought that the Justice Department might take the preemption route to try and get the law declared unconstitutional, however I’m not talking about conflict preemption, but field preemption. This sub-species of the Supremacy Clause states that even without a conflict between state and federal law, or without an express declaration by Congress that the federal law will be supreme, the state law may be overwritten if the federal regulatory scheme is so pervasive as to “occupy the field” of the area of law in question, in this case, immigration law.

Basically the court looks at the federal law and tries to determine if Congress’ intent was to not have the federal law supplemented by state law. There is a whole range of tests that determine whether Congress has invoked field preemption. I’d be happy to get out my Con. Law notes and give a more comprehensive analysis if you like, but the moral of the story is: don’t discount this suit too quickly, Ed. It could still have teeth, even with the BIET argument.

But in this case, the state isn’t setting itself up as a higher jurisdiction, or any jurisdiction; it doesn’t supplant anything.  The state will not try these cases.  All cases of suspected illegal immigration will get referred to the feds.  It would be akin to saying that it’s unconstitutional for local police to respond to a bank robbery in progress because robbing an FDIC-insured bank is a federal crime.  Mark isn’t defending the lawsuit, I should emphasize, but merely providing the administration’s argument for it — and thereby demonstrating how weak it is.
Posted by Sam at 6:58 AM