California is a cool place 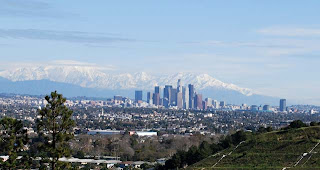 Some messed-up weather we're having.

I won't complain as long as we keep getting rain here in San Antonio!

LAX got to only 67 degrees, breaking a record set in 1926, according to the National Weather Service.
Temperatures are expected to stay fairly cool Saturday, with highs around 70 on the coast and in the 80s inland. Conditions will be a bit warmer on Sunday, according to the weather service.

July has turned out to be cooler than normal.

Instead of daytime highs approaching the mid-80s, downtown L.A. has experienced temperatures in the mid- to high 70s. From June 1 to July 5, daytime and nighttime temperatures have averaged a relatively cool 69.8 degrees.

That makes that stretch one of the cooler ones for that time of the year in the last 10 years, just slightly warmer than the same period in 2004 (69.4 degrees) and 2002 (68.9 degrees). The cooler ocean air early in the day has a moderating effect on daily temperature conditions. And low-lying clouds have been tempering the sun's heat.
Posted by Sam at 8:42 AM