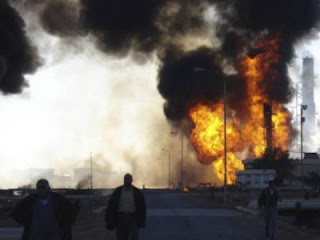 Also note alcohol may have been a factor as well.  Ya think?

A man mixing materials to make homemade fireworks was killed Sunday night when he miscalculated and the mixture exploded, authorities said.

The incident occurred just after 7:30 p.m. at the man's home in the 5100 block of Sherry Drive on the city's Southwest Side.

Police Sgt. Mark Hubbard said the man was ex-military and had a holiday hobby of making fireworks. Hubbard said alcohol was believed to be a factor in the accidental death.