Teenagers will be teenagers 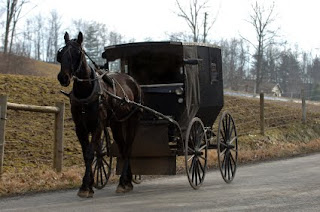 LEON—An Amish teen who tried to flee police faces charges of alcohol possession and “overdriving an animal” after he crashed his getaway vehicle— a horse and buggy.

Cattaraugus County sheriff’s deputies reported over the weekend that Levi E. Detweiler, 17, ran a stop sign and refused officers’ attempts to stop the buggy. Deputies chased Detweiler for about three quarters of a mile, and when he tried an unsafe turn into a driveway, he crashed the horse and buggy in a ditch. The teen then fled on foot but was found later in the area.

The Sheriff’s Office Criminal Investigation Bureau completed an investigation and charged the youth with possession of alcohol by someone under 21, overdriving an animal, seconddegree reckless endangerment, failure to stop at a stop sign and failure to yield to an emergency vehicle in the incident that occurred at about 1:30 a. m. last Monday. He is free on $500 bail.
Posted by Sam at 2:56 AM