Demon Rum made him do it! 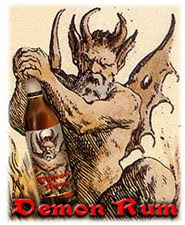 I love that line with its almost classic British understatement undertones.

"Police said alcohol may have played a role in the incident."

How many times can that be said of many of the incidents we run across?

A man was arrested after repeatedly smashing into a gasoline pump at a Northwest Side station and then trying to flee Thursday night, police said.

The driver caused an estimated $20,000 in damage when his blue Dodge pickup smashed into a pump at a CITGO station at Grissom Road and Timberhill shortly after 7:30 p.m.

“I heard a big noise, went outside, and saw the truck hit the pump,” said Sadan Pant, who operates the four-pump convenience store. “Then he backed up, hit the concrete barrier around the pump, then backed up and tried to drive off. All I could think was I hope (the pump) doesn't explode.”

Police said alcohol may have played a role in the incident.