Don't spit on a jury, ever! 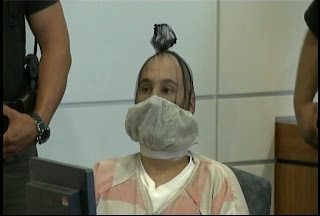 Murderer Appears in Court Wearing Diaper on Face After Spitting on Jury!
myfoxdc.com

CLEVELAND - An Ohio murderer who spit on a jury returned to court, this time, with a plastic diaper on his face!

Neil Simpson appeared in an Elyria court wearing mosquito netting along with the diaper around his head.

The convicted murderer told the judge he'd rather be executed then spend the rest of his life in jail.

"I have two ways that I prefer to be murdered, one is to be crucified in front of the courthouse for all to see it, for all the convicts throughout the world, and the other way would be to be stoned to death by the victim's family, to be make them feel better," said Simpson.

Simpson was found guilty for the murder of pizza shop owner Dave Kowalczyk in June of 2007 during a robbery.

A jury recommended Monday that Simpson's life be spared, accepting the defense claim he was raised in a hostile environment.

Ironically, their act of mercy came a week after Simpson spit on members of the jury and cursed at them.

Kowalczyk's family members say Simpson robbed them of a warm and giving loved one.

Asst. Lorain County Prosecutor Tony Cillo stated in court, "Because at heart your honor, he's nothing more than a coward, somebody that covers his face and walked in and shot a defenseless man at close range.

That's the true Neil Simpson, the bravado he shows in court, spitting on the jurors, I've never had the misfortune of meeting a more foul piece of humanity at this point in my life."

The judge sentenced Simpson to life in prison without parole.
Posted by Sam at 7:52 AM