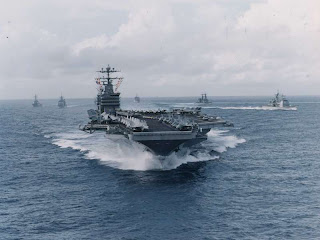 If they attack our Naval vessels I think we should return fire, particularly if our ships are in International waters.

In Vietnam for a Southeast Asian regional security forum, U.S. Secretary of State Hillary Rodham Clinton and a North Korean official traded barbs over the ship incident, the upcoming military drills and the imposition of new U.S. sanctions against the North.

The spokesman for the North Korean delegation to the talks, Ri Tong Il, repeated Pyongyang's denial of responsibility for the March sinking of the ship that killed 46 South Korean sailors and said the upcoming military drills were a violation of its sovereignty that harkened back to the days of 19th-century "gunboat diplomacy."