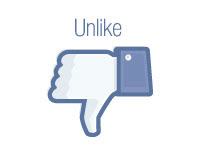 Gee. no wonder folks wanted to defriend her on Facebook!

A feud which started on Facebook ended with the early-morning slaying of a young Tennessee couple, found shot in the head with their sobbing baby still clutched in her dead mother's arms, police said.

But nobody ever thought it would get to the point where her father and boyfriend stand accused of murder on her behalf, Reece said.