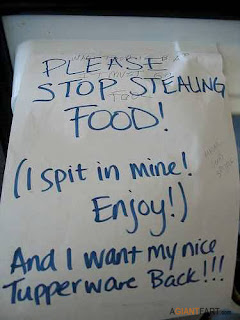 Great defense; "I was keeping the shared refrigerator clean"!

DEER PARK, Texas (AP) — A sting operation by a suburban Houston police department netted one of their own when surveillance cameras caught an officer repeatedly stealing colleagues' food and drinks from the refrigerator in the station's break room.

Griggs says he authorized the video sting because the thefts have been going on for too long. Even though the items being stolen may be of trivial value, Griggs says theft is theft.