Prayers for an injured Officer 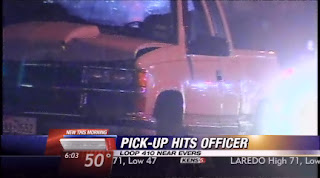 My prayers go out to the officer for a complete and speedy recovery.

A San Antonio police officer was in critical condition at University Hospital Sunday night after he was hit by a truck as he helped a fellow officer with an accident on the city's Northwest Side, officials said.

SAPD Chief William McManus said the five-year veteran traffic officer was helping set up cones to divert traffic from a collision on the access road at Loop 410 and Evers Road after 6 p.m., when the accident occurred. The officer saw the truck headed toward him and ran onto the median where the vehicle struck him and knocked him into the outside traffic lane, McManus said.

Officials did not disclose the name of the officer.