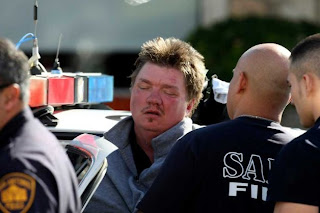 The radio news had reported that there were two officers on a break at the Jim's when he entered and went into the bathroom with the cash!

Hell, everyone knows there's usually a police officer or two at a Jim's restaurant!

A man who robbed a bank north of downtown, walked to the bathroom of a Jim's Restaurant and then held off police briefly before surrendering Monday afternoon.

San Antonio police received a call about 2:45 p.m. about a holdup alarm at Wells Fargo at Broadway Street and East Hildebrand Avenue. It appeared that the 42-year-old suspect — unarmed — demanded money and then walked a short distance south to the Jim's Restaurant, San Antonio police Sgt. Chris Benavides said.

A witness followed him and was able to give a good description to police, who responded quickly. The man had entered a restroom and police ordered the evacuation of the diner.