Might as well go out and blame everyone else in the whole world while you're at it!! 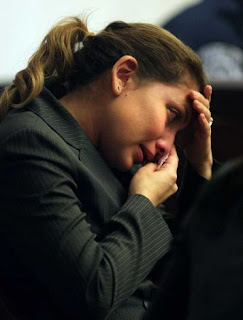 THIS? This testimony is going to help her?

You have got to be kidding?  We begged her to go out and party?

She's blamed EMS.  She's blamed the driver of the other vehicle that she collided with while she was driving the wrong way down the highway.

Now I guess she's trying to blame the husband who had an affair and cheated on her.

How about y'all, yeah you Mom and her friends, being accomplices in the death of Erica Smith?


Jenny Ann Ybarra's best friends and mother testified Wednesday that they'd begged her to go out and enjoy herself on the night in December 2007 when she caused a head-on collision that killed Erica Nicole Smith, 23.

She was a new mother who recently had caught her husband in an affair, they testified as defense witnesses at Ybarra's intoxication manslaughter trial.

“She was just very upset because of some problems that they had in their marriage,” said JoAnn Ybarra, who said her daughter and new granddaughter, Brooklyn, had moved into her home in Seguin that November. “She would basically cry every day; she was a total wreck.”