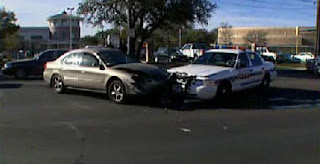 The good news for this drunk driver is that the police officer he crashed into wasn't injured.

The bad news for this drunk driver is that he hit crashed into a police car.

A suspected drunk driver crashed into an officer's squad car early Saturday morning on the city's East Side.

San Antonio police spokesman Matt Porter said the officer was traveling east along the Loop 410 access road about 1:30 a.m. He was crossing a green light at Perrin Beitel when the southbound suspect drove through a red light and struck the squad car on the front left side.

The officer was not hurt in the crash.