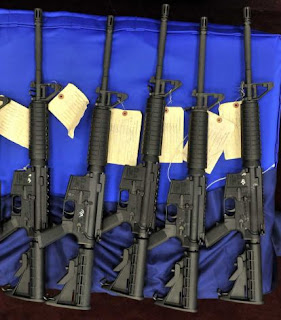 Well, since the Feds and the DOJ apparently are not running guns into Mexico any longer they've got to get their weapns somehow.

But really?  Using your Momma and Auntie to buy the guns for you?

Seized guns were bound for Zetas
By Guillermo Contreras - Exprss-News


Authorities said Wednesday that in breaking up a San Antonio-based smuggling ring that funneled guns to the Zetas drug cartel across the border from Eagle Pass and Del Rio, they seized 203 weapons but were unable to stop every shipment.

Officers said they confiscated mostly assault-style rifles and one .50-caliber Barrett sniper rifle in five separate shipments between May and August 2010. But they said they also learned that three other shipments with an unknown number of weapons made it to Mexico before they started investigating.

They arrested 22 defendants — all from the San Antonio area — accused in the smuggling, nine of whom have been sentenced to prison terms ranging from one year to 14.