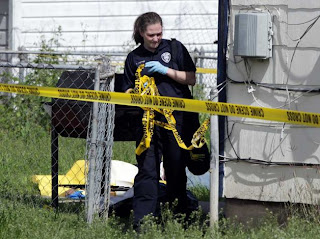 Is this related to the recent arrests and sentencing of gang and apparent drug cartel members?

You know, paybacks to some suspected to have been snitches or just inner jostling as folks try to move up the ladder?

Two men were fatally shot Friday afternoon in an apparent confrontation at a home on the Northwest Side.

Police Sgt. Steve Priore said one of them, a man who lived in the house in the 200 block of Viendo, may have shot and killed the other man.

The resident — believed to be in his 20s — was taken to a hospital, where he died.