Don't hurt yourself while patting yourselves on your backs 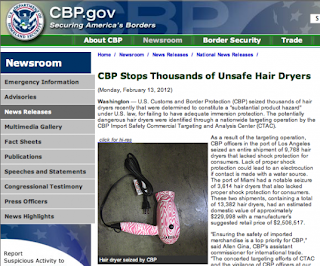 We have been saved by President Obama from this heinous invasion of dangerous hair-dryers!!

How many folks illegally crossed our borders recently?

"U.S. Customs and Border Protection (CBP) seized thousands of hair dryers recently that were determined to constitute a “substantial product hazard” under U.S. law, for failing to have adequate immersion protection," DHS announced.  "The potentially dangerous hair dryers were identified through a nationwide targeting operation by the CBP Import Safety Commercial Targeting and Analysis Center (CTAC)."

CBP seized the hair dryers at the ports of Los Angeles (9,768 hair dryers) and Miami (3,614) because they "lacked shock protection for consumers" in the event of the hair dryers' immersion in water.