Hungry for the McDonalds 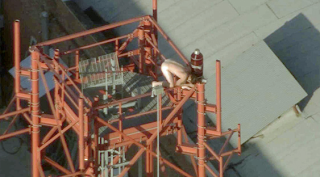 Ok, whatever just get down from there and put on some clothes please.

You know he's crazy when he's tempted by burgers from McDonalds.


Police were able to lure a naked man who spent hours atop a downtown radio tower with McDonald's hamburgers.

The man climbed to the top of the tower Wednesday night. At one point, police sources said, he asked for hamburgers from McDonald's. Officials complied, and he agreed to come down after eating his meal.

The 45-year-old Arizona resident was uninjured. It was unclear why he climbed the structure, which is part of a city personnel building just east of the downtown skyline.