Struck by The Karma Train 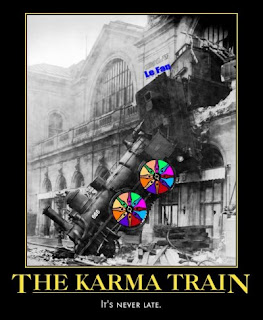 That Karma's a bitch!


A man who was reportedly tagging a stopped train was fatally struck by a second train Sunday morning on the West Side, San Antonio police said.

The man, described by police as being in his late 20s or early 30s, was pronounced dead at the scene of the crash, which took place on Union Pacific's tracks on General Hudnell Drive near U.S. 90. His name has not yet been released.

SAPD Sgt. Earl Tovar said the crew of a northbound train saw the man spray-painting a stopped train around 11:15 a.m. and sounded the horn to alert him. The man went to retrieve a can of spray paint he'd left on the tracks, Tovar said, and was struck as he bent down. He suffered severe head injuries.