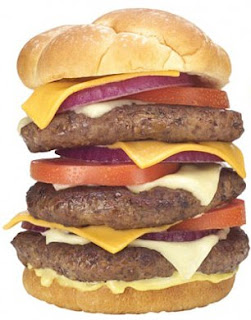 Eating there is kinda like giving the finger to the Gods of Karma, isn't it?

It was always going to be unwise naming a restaurant that glorifies unhealthy food the Heart Attack Grill.

And on Saturday the inevitable happened when a customer suffered a cardiac arrest in the chain's Las Vegas branch.

An onlooker captured video of paramedics wheeling the unidentified man, thought to be in his 40s, out of the fast-food diner.

He was midway through eating a 6,000-calorie Triple Bypass Burger when he began experiencing chest pains.