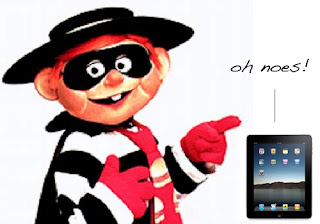 My concern?  Who steals textbooks?

Plenty of folks will steal iPads.  I hope no one will get hurt.

NEW BRAUNFELS — New Braunfels freshmen will be given iPads instead of text books this fall.

After months of discussion, the New Braunfels ISD Board of Trustees voted to buy 700 electronic tablets for its incoming ninth-graders. The decision was made on Wednesday night at the board’s monthly meeting in the NBISD Education Center Board Room, 430 W. Mill St.


The vote received unanimous approval, and even garnered a strong show of support from trustees Sherry Harrison and Rob Johnson — both of whom appeared less than enthusiastic about the proposal during last month’s board meeting.