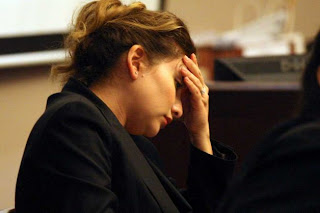 Obviously, the Defendant doesn't appear too happy to be there in Court getting tried for Intoxication Manslaughter.

Her victim, Erica Nicole Smith, however would be glad to be able to be anywhere.

But oops, she can't, because she's dead.

Trial testimony Thursday described Jenny Ann Ybarra as having a blood alcohol level of 0.13 — nearly twice the legal limit — after driving the wrong way on Loop 410 and crashing her silver Lexus into a black Honda early Dec. 16, 2007.

The crash killed Erica Nicole Smith, 23, and Ybarra, now 32, has pleaded not guilty to intoxication manslaughter. Her lawyer spent Thursday questioning the credibility of prosecution witnesses, from San Antonio police to a hospital nurse to Veronica Hargrove, a toxicology chemist at the Bexar County medical examiner's office who analyzed her blood.

The two vehicles hit nearly head-on and Smith, a front-seat passenger in the Honda, was trapped for more than two hours, presumed dead by an ambulance crew that didn't check for vital signs. A police officer discovered she was breathing and she was later extricated from the car and taken to a hospital where she died the next day.