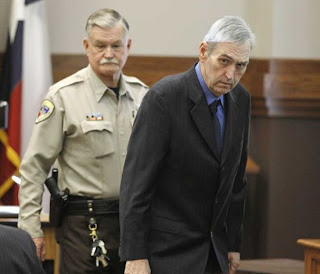 WEATHERFORD, Texas (AP) — A Texas woman described being whipped on a deer-skinning device and enduring repeated sexual assaults as she was held captive for 12 days by a former neighbor, telling jurors Wednesday that she was terrified he would kill her.

The woman said Jeffrey Allan Maxwell kept her handcuffed or chained to a bed and gagged, and put her in a wooden box at least once when he left her alone at his house in Corsicana, about 50 miles south of Dallas. He eventually removed the restraints when they were in the same room, so she was able to run out of the house after he answered the door when authorities came by to question him about her disappearance.

"My goal was to stay alive. I didn't want to die," the 63-year-old woman told jurors during about four hours of testimony.