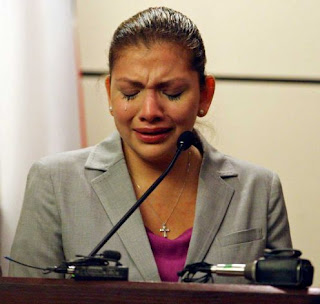 After blaming seemingly everyone; from EMS, to her wayward husband, to her friends and family who told her to go out and enjoy herself, to her having a baby,  to the driver of the vehicle she hit while she was driving the wrong-way on Loop 410, and she probably even blamed you and I as well.; the jury didn't buy into it and found her guilty.

This was a jury who didn't leave their common sense at home.

Thank you for that.

The punishment phase begins this morning.  She is facing up to twenty (20) years at TDCJ.  She deserves no less.

Four years after an ambulance crew left Erica Nicole Smith untreated for hours at the scene of a horrific wrong-way crash on Loop 410, jurors decided Monday that intoxicated motorist Jenny Ann Ybarra was to blame for her death.

Ybarra, 32, held her face in her hands and wept as state District Judge Lori Valenzuela read aloud the guilty verdicts for intoxication manslaughter, manslaughter, driving while intoxicated and assault after four hours of jury deliberation.

Ybarra was then handcuffed and led into custody by deputies for the first time since 2007. Family members of Smith, who filled the courtroom, also wept.