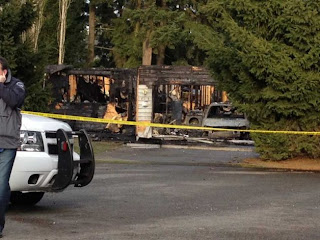 This is just tragic.

GRAHAM, Wash. (AP) — Josh Powell's note was simple and short, a farewell to the world after two years of being scrutinized in the media, hammered by police and questioned by judges, prosecutors and social workers, living his life under a microscope since the day his wife vanished.

"I'm sorry, goodbye," Powell wrote in an email to his attorney just minutes before authorities say he set fire to his home, killing himself and his two young sons days after he was denied custody and ordered to undergo a psycho-sexual evaluation.

The Sunday blaze at Powell's home brought yet another twist in the very public scandal that began when Susan Powell vanished in 2009. The case had since spiraled into a salacious saga of finger-pointing and accusations of sex and lies — and now the unthinkable loss of two young lives caught in the crossfire.