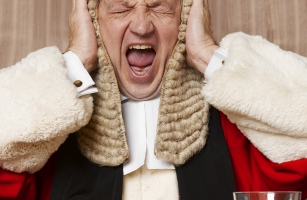 It doesn't matter if the guy may have acted like a douche-bag.

This is more than a bit of overreach by the Judge IMHO.

Threatening jail unless he posts daily apologies for 30 days is judicial bullying, pure and simple and should not be tolerated.

CINCINNATI (AP) — A man who was threatened with jail time for posting comments about his estranged wife on his personal Facebook page unless he posted daily apologies for a month says the court ruling violates his freedom of speech.

Mark Byron, who is making the apology to avoid 60 days in jail, said Friday night that he believes it's too late for him to appeal the domestic relations court ruling as planned. But the Cincinnati man and free speech and media experts say it should concern other users of the social networking site.

With hundreds of millions of people using Facebook for communication, Byron said that "if they can do this to me, they can do it to others."

The idea "that anybody could tell you what to say to your friends on Facebook should be scary to people," said Cincinnati attorney Jill Meyer, who specializes in free speech and media issues.