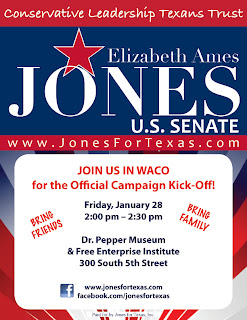 Who knows how all of this will end.

An Austin lawyer sued the state Monday, demanding that it stop paying the $115,200 salary of Railroad Commissioner Elizabeth Ames Jones, who moved from Austin to San Antonio last year to run for state Senate against incumbent Jeff Wentworth.

Bill Aleshire, a lawyer and former county judge for Travis County, is asking Comptroller Susan Combs to stop “the use of his and other people's taxes from being used to pay the salary of a state official who has openly violated the Texas Constitution.”

Wentworth first raised the issue when Jones entered the race, arguing that she couldn't have it both ways: Jones was either illegally running in Senate District 25 while living in Austin or illegally retaining her position on the Railroad Commission while living in San Antonio, Wentworth claimed.