When stupidy and egos collide 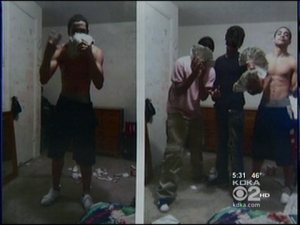 PITTSBURGH (KDKA) — Police say they stole thousands of dollars in cash and goods, and then posed with their loot and posted the photos to a popular social media site.

Police say the three suspects, along with another teen, posted the photos on Facebook about an hour after they burglarized Elliott’s Town Market on Chartiers Avenue in the West End.

“We received information the day after the burglary that these pictures were posted on Facebook, and if you look at the pictures, you can see that the individuals are holding a large amount of cash,” Sgt. Kevin Gasiorowski, of the Pittsburgh Police, said.