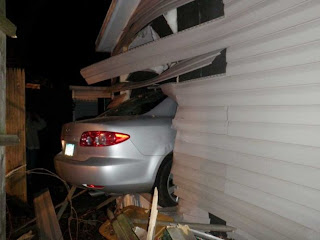 2. Being DUI and crashing your car into a police station?

Authorities say a driver has crashed his car into the wall of a Chicago police station on the city's South Side.

No injuries or major damage was reported after the vehicle careered into a cement wall near the Gresham Police District police station .

Chicago police spokeswoman Amina Greer said the driver in a 1987 Chevy allegedly hit a tree and a barrier on the side of the station.

The 36-year-old driver was cited for driving under the influence and leaving the scene of an accident. He was the only occupant of the car.