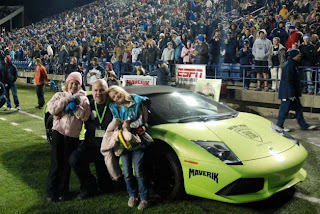 SALT LAKE CITY (AP) — A truck driver who won a Lamborghini worth about $300,000 in a convenience store contest crashed the sports car six hours after he got it, and he now plans to sell the 640-horsepower convertible because he can't afford the insurance or taxes.

"I already had offers on it. I'm going to sell it," David Dopp said Wednesday. "I have bills more important than a Lamborghini. I've got a family to support."

Dopp, a 34-year-old truck driver for Frito-Lay, spun out of control just a few hours after taking the keys to the Murcielago Roadster that he won in a "Joe Schmo to Lambo" contest sponsored by Maverik convenience stores.