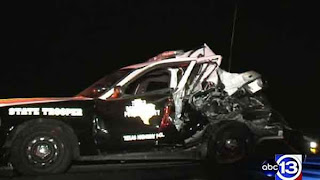 He kept ramming the DPS cars?  What an idjit.

A Texas Department of Public Safety trooper shot a man in a stolen vehicle after a pursuit early Sunday that ended at a South Bexar County gas station, a spokesman for the agency said.

The injured man, whose name was not immediately released, was taken to San Antonio Military Medical Center. He was listed in stable condition after undergoing surgery Sunday morning, said Trooper Deon Cockrell.

Cockrell said officers had been following the stolen vehicle, a pickup, whose driver stopped on his own at a Shell gas station near Interstate 37 and Loop 1604 around 1:40 a.m. Sunday.