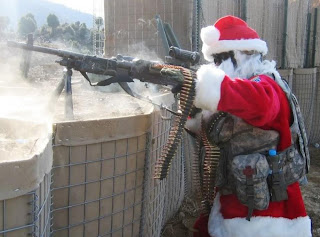 What a sad day.

GRAPEVINE, Texas (AP) — Police in a quiet Fort Worth suburb worked Monday to piece together a family history after a man dressed in a Santa Claus suit apparently shot six relatives and himself on Christmas.

Grapevine police spokesman Sgt. Robert Eberling said the shooter showed up in the Santa outfit shortly before gunfire erupted and that the family appeared to have been opening Christmas presents. Police responding to a 911 call found four women and three men dead, along with two handguns.

"We think he was just inside there celebrating Christmas with the rest of them and decided for whatever reason that's how he's going to end things," Eberling told The Associated Press.