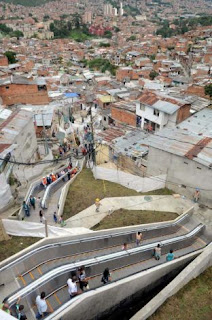 Okay, granted it looks like a good thing but what happens in a tropical thunderstorm?

Why don't they at least have a roof or something over it?  Or is it waterproof?

BOGOTA, Colombia (AP) — Officials in Colombia's second-largest city on Monday inaugurated a giant, outdoor escalator for residents of one of its poorest neighborhoods.

For generations, the 12,000 residents of Medellin's tough Comuna 13, which clings to the side of a steep hillside, have had to climb hundreds of large steps authorities say is the same as going up a 28-story building.

Now they can ride an escalator Medellin's mayor says is the first massive, outdoor public escalator for use by residents of a poor area.