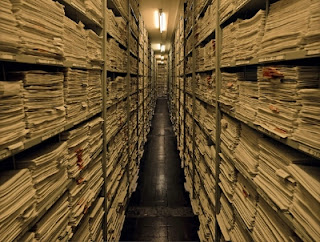 This sounds pretty open and shut to me, at least as to the theft of the documents and the like.

Fighting cancer and reeling from the recent pilfering of his life's work, internationally known Holocaust researcher Harry Mazal spent his last months “devastated, despondent and consumed with stress and anxiety,” according to court documents filed this week.

The lawsuit, initiated by his widow on behalf of his estate and The Mazal Holocaust Library — one of the largest collections of Holocaust documents in the world — seeks an injunction barring further sale of missing documents, as well as financial compensation for Mazal's mental anguish and items that have not been recovered.

Mazal, 74, died in August, eight months after intern Mansal Denton, 21, was arrested and charged with stealing between $100,000 and $200,000 from the Hill Country Village-based nonprofit. Denton, who is awaiting trial, could face up to life in prison if convicted.