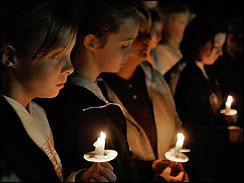 FREDERICKSBURG, Ohio (AP) -- A man cleaning his muzzle-loading rifle shot the gun into the air, accidentally killing a 15-year-old Amish girl driving a horse-drawn buggy more than a mile away, a sheriff said Tuesday.

Rachel Yoder was shot in the head Thursday night while traveling to her home in Wayne County, between Columbus and Akron. She had attended a Christmas party for employees, most of them under 18 years old, at an Amish produce farm and was riding home alone when she was shot, Wayne County sheriff's Capt. Douglas Hunter said.

The horse continued to cart the girl after she was shot, and she fell out of the buggy near her home, Holmes County Sheriff Timothy Zimmerly said. Her brother found her after he saw the horse walking in circles and went to check it. Authorities initially believed she had fallen out of the buggy and hit her head until a hospital test revealed the gunshot wound.