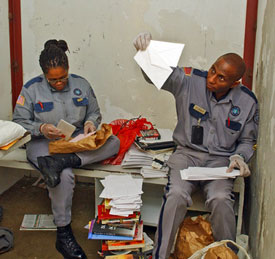 I can't imagine that this will end well for the State and some of its employees.

Defense attorney Tony Reyes was in the middle of calling witnesses for his client's embezzlement trial last January when, during a jury break, a district attorney's office employee served him with a search warrant signed by a judge in another courtroom.

State District Judge Ron Rangel told Reyes to stand back as a prosecutor then began sifting through documents on the defense table, the attorney recalled Wednesday as he testified at a hearing for his client's motion for a new trial.

The tactic — in which Reyes was named a criminal suspect alongside his client on the search warrant — was so unheard of and shocking that it obliterated his ability to zealously defend his client, he and a large team of attorneys have alleged during sporadic hearings over the past month.