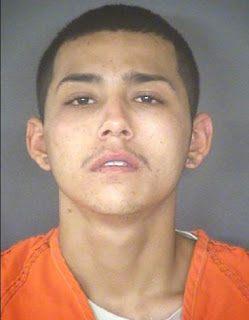 Well this explains how he got away.

He should have stayed in the vehicle because now he's probably going to have a felony escape charge added and he was severely injured.

Of course it probably means he'll be collecting social security disability payments for the rest of his life and we'll get to foot the bill.

A man who jumped off Interstate 35 while fleeing from San Antonio police Monday, after he'd wriggled out of the back window of a patrol car in handcuffs on the East Side, remains hospitalized days later, officials said.

Johnathan Andrew Gomez, 20, was in stable condition at San Antonio Military Medical Center with a broken back and head injuries, according to San Antonio police and a SAMMC spokesman. He was booked by proxy at the hospital on one count of escape but already has posted $5,000 bail on the charge and no longer is in custody, county records show.

Gomez's actions snarled traffic on I-35 near Splashtown for hours Monday after he jumped off a bridge and fell about 50 feet onto the grassy bank of Salado Creek. Gomez had escaped from the officer at a nearby gas station and hitched a ride in a produce truck until police stopped the truck on the bridge, according to a police report.