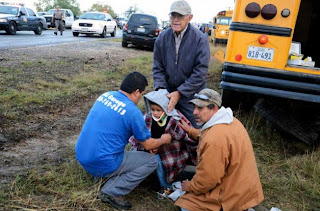 Obviously the deceased driver was waay in the wrong here.

I still think the school bus driver ought to get some sort of recognition for being able to keep the bus upright after it was hit and then lost its front axle.

I shudder to think what the outcome would have been otherwise.

A driver speeding on Texas 16 was killed early Monday when his car clipped a school bus full of students as he tried to pass it, causing both vehicles to collide with a pickup, officials said.

Two men in the pickup were seriously injured and the bus, minus its front axle, came to a stop upright in a ditch. The 44 students on the bus were not seriously hurt.

“It was amazing the bus didn't roll over,” Texas Department of Public Safety Trooper Kyle Harriman said. “It's not like (the bus driver) could steer or had any front tires — he was just along for the ride, mostly.”