Another example of instantaneous karma? 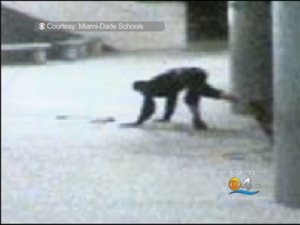 It got him too.

MIAMI GARDENS (CBS4) – A thief apparently looking to steal copper from equipment on the roof of a Miami-Dade school fell more than two stories, a debilitating plunge that left him unable to walk, apparently with a broken hip or leg.

The hapless Spiderman was captured by security cameras at Charles Wyche Elementary School in Miami Gardens.  He arrives, wearing a ski mask, and begins to arrange ropes he’s carrying for a climb up the outside wall of the school to the roof, more than two stories above.   Moments later a second camera angle shows the man falling to the ground – a drop of more than 25 feet – where he begins to writhe in pain.  The intruder dragged himself out on to a walkway and attempted to stand up, but immediately fell back down.  He then dragged himself on his belly out of the school, pushing a pair of bolt cutters in front of him.

“He was trying to get on the roof of the school to commit copper theft,” said schools police Sergeant Ivan Silva.  “As you can see from the video, he’s not the most skillful burglar.”