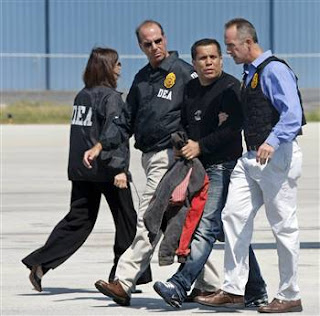 Now here in Comal County we're waiting to hear about an extradition on Lee Roy Suarez who murdered someone, stabbed the deceased's brother, here in New Braunfels and then fled to Mexico back in 2004.

This gives me hope we will get his extradition granted.

An alleged prison gang member wanted in connection with the killing of a U.S. consulate employee, her husband and another employee's spouse has been extradited to the United States, Mexican authorities have announced.

He's one of 35 people charged in a drug conspiracy case that alleges that the Barrio Azteca prison gang, working with the Juárez Cartel, engaged in drug trafficking and murder on both sides of the Rio Grande.