This is why I never drive my Ferrari with other Ferraris 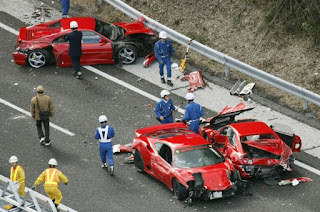 TOKYO (AP) — An outing of luxury sportscar enthusiasts in Japan ended in an expensive freeway pileup — smashing a stunning eight Ferraris, a Lamborghini and two Mercedes likely worth more than $1 million together.

Police say they believe the accident Sunday was touched off when the driver of one of the Ferraris tried to change lanes and hit the median barrier. He spun across the freeway, and the other cars collided while trying to avoid hitting his car.