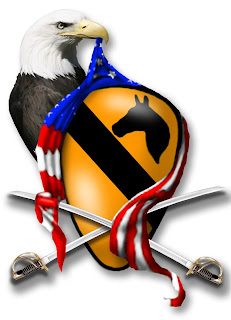 What a tragic story of epic stupidity.

What else could it be called?

BTW I am not impugning the 1st Cav.

FORT HOOD, Texas (AP) — Military prosecutors say a soldier from Massachusetts who died in Iraq was killed by his roommate during a game in which they tried to see how fast they could draw and aim their 9 mm pistols at the other.

Authorities say Sgt. Matthew Gallagher of Falmouth was shot in the head by Sgt. Brent McBride on June 26. Gallagher died a week before his 23rd birthday.

The Cape Cod Times  reports that the Army held a hearing Saturday at Fort Hood to determine what charges McBride should face. Both soldiers were with the 1st Cavalry Division.