Stealing Chritmas trees is pretty low on the totem pole 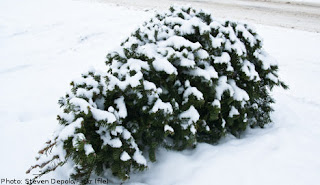 Tree-snatchers exposed by tracks in the snow
The Local -

Police in Uppsala, north of Stockholm, caught two thieves stealing Christmas trees after following the tracks in the snow where they had dragged the loot from the scene of the crime.

Police received a tip off from someone who said they had seen a man and a woman rooting around under a tree-seller's tarpaulin at Vaksala Torg in central Uppsala.

”It was a couple in their thirties that dragged off three Christmas trees that one of the sellers had left at the square,” said Sundin to the paper.
Posted by Sam at 9:50 AM