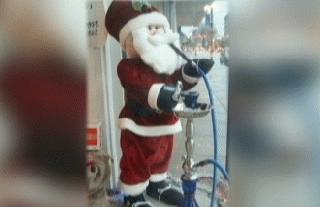 So that's why old Santa is always so jolly!

GREENVILLE, Pa. (AP) — A northwestern Pennsylvania tobacco shop is turning the image of the jovial, pipe-smoking Santa on its head by having Saint Nick huff on a hookah.

Up In Smoke store manager Sue Stoyer says that customer reaction to the display has been mixed. But she notes that many early depictions of Santa Claus have him puffing on a pipe.

Clement Moore's "A Visit from St. Nicholas" includes a reference to the jolly old elf clenching a pipe in his teeth, with a ring of smoke around his head.

The tiny town's holiday parade earlier this month made the window a source of both amusement and scorn. But Stoyer shrugs off any criticism. She says Santa's history as a smoker is on the shop's side.