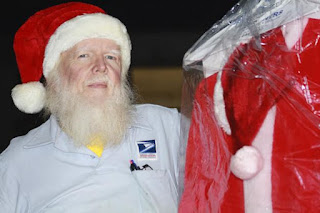 Its apparently someone who was offended.

Bah Humbug on them I say!

While dreams of Santa popping down the chimney on Christmas Eve to deliver presents were extinguished for most during childhood, a select few Bellevue residents have seen St. Nick trade in his sleigh for a mail truck.

For more than a decade now, letter carrier Bob McLean has driven around Bellevue each holiday season, delivering a little Christmas cheer while wearing a full Santa getup for two or three days. But this year, a local grinch complained to the U.S. Postal Service, and McLean has been banned from bringing his alter ego to work this year.