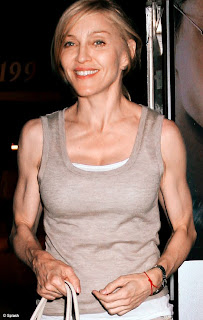 Really?  There wasn't anyone else?

Madonna to perform at halftime of Super Bowl
Associated Press -

NEW YORK (AP) — The Material Girl will be taking the stage on football's biggest night.

Madonna, who has sold more than 300 million records, will perform at halftime of the Super Bowl in Indianapolis. The NFL and NBC announced Sunday during the Detroit-New Orleans game that the Grammy Award-winning singer will highlight the show at Lucas Oil Stadium on Feb. 5.

The show is the most-watched musical event of the year, with more than 162 million in the U.S. tuning in to see The Black Eyed Peas' performance with Slash and Usher in Dallas at halftime of Green Bay's Super Bowl win over Pittsburgh last February.