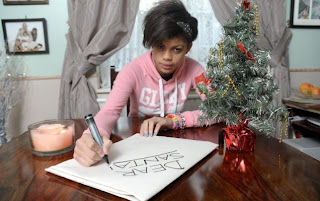 If it isn't this girl and her family have some serious issues.

Schoolgirl threatens to kill Santa Claus if he doesn't bring the right presents
A 13-year-old girl has shocked her mother by asking Father Christmas for a list of presents and threatening to kill him if he doesn't comply.
Metro.co.uk -

Christmas letters to Santa asking for a new bike or toy are usually endearing notes penned by wide-eyed innocent children.


But Mekeeda Austin has warned Father Christmas that he will be ‘killed’ if he fails to deliver at least two of her long list of gifts – including a BlackBerry smartphone and ‘the real-life Justin Bieber’.


The 13-year-old goes even further and threatens to ‘hunt down’ Old Nick’s reindeer so she can ‘cook them and serve their meat to homeless people on Xmas day’.


Her mother, Tracey, from Brickhill, Bedford, found the note – which ends ‘Remember… two of these, or you die’ – in Mekeeda’s school bag but has vowed to try to meet her daughter’s demands rather than punish her.


‘When I first found the letter, I thought it was funny. Now I think I’d better get her what she wants. The last thing I want is for her to kill Santa,’ said Mrs Austin, 40.


And the demanding Mekeeda added: ‘I don’t really believe in Santa any more but I was angry because I thought I wasn’t going to get all the presents I wanted this year.

‘I want all of these things and I don’t see why I shouldn’t get them.’