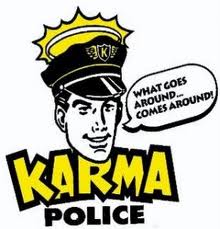 Its gonna get you!

OGDEN, Utah (AP) — Police in Utah say a vehicle was burglarized outside an Ogden store while its owners were being accused of shoplifting from the business.

Police told the Standard-Examiner of Ogden and Deseret News that 36-year-old Eldon Alexander and 47-year-old Korin Vanhouten were released after being cited in the theft of small-ticket items worth about $25 from a WinCo Foods store.

Police say the two then walked into the parking lot and discovered the theft of a stereo amplifier, drum machine and other items valued at about $60 from their vehicle.